We have your differential parts in stock ready to ship today. West Coast Differentials stocks a complete line of light duty axle parts for Chevrolet, Chrysler, Dana, Ford, GM, Jeep and Toyota and more! Order before 4PM and most parts ship out the SAME DAY!

Our 2012 Jeep JK features a 3″ Teraflex suspension with a full set of adjustable control arms, Hanson Offroad bumpers front and rear, a Warn 9.5 cti winch and 35″ BFGoodrich KM2 tires. We installed a set of Spidertrax 1.5″ wheel spacers, allowing us to use the factory Rubicon wheels without any clearance issues. The result is an extremely comfortable vehicle that performs wery well both on road and off. The new 3.8L Pentastar V6 produces 285 HP and 260 ft/lbs of torque. Coupled with a 5-speed automatic transmission, the new powertrain is a substantial improvement over the 2011 and earlier models.

Update – July 2013: Since the original buildup, the JK has received a few upgrades. The 35″ BFG’s were swapped out for a set of 37’s mounted on AEV Pintler wheels. The correct backspacing of these wheels allowed us to get rid of the wheel spacers we were running with the stock wheels. To accommodate the larger tires, we swapped out the original 3″ coils for a set of 4.5″ AEV coils, along with AEV’s front control arm drop brackets, rear track bar brackets and high-steer kit. We’ve also added some Hanson Off Road rocker guards and an AEV Rear Bumper & Tire Carrier. The 4.88 Sierra Gear ring and pinion is a good ratio with the 37″ tires, although RPM’s are a bit high at 75 MPH on the highway. A 4.56 ratio gearset would also be a good choice for the 2012 and newer JK’s. We’d recommend 5.13 or 5.38 gears for the 2011 and earlier JK’s.

After several runs through the Rubicon Trail and a couple of trips to Moab, the stock skid plates and crossmember on the underside of the Jeep have taken quite a beating. We installed a full compliment of PureJeep skid plates, including their engine, transfer case and fuel tank skids as well as a new PureJeep HD cross member. 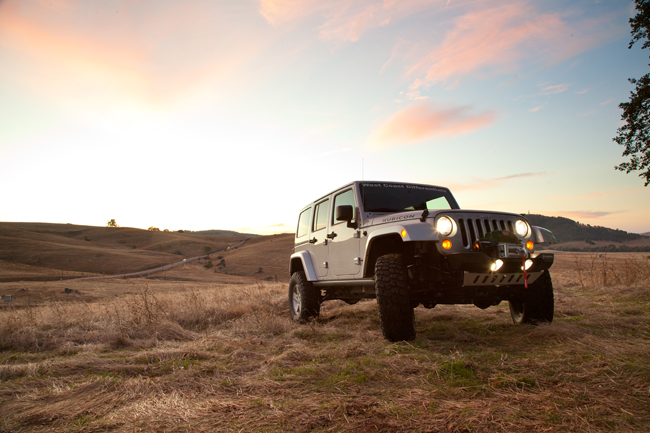 Erik Jorgensen has done differential work for Ring and Pinion Service since 1993. He built this ’69 Camaro over a two and a half year period and finished in 2004. Erik found the body in Turlock, CA, and got the frame from someone else in Reno. He parted out another Camaro to come up with the ’95 Corvette LT1 motor and a 6 speed manual tranny. The rear end is a 12 Bolt with an Eaton posi and 4.56 gears. The interior is mostly original with aftermarket seats. And in case you are wondering, the paint is Dodge Viper Red.

We returned from Moab a few years ago wanting something different in a trail rig. We bought a military surplus Hummer that isn’t the most radical rig on the trail but it does get attention. We removed the rear helical differential and replaced it with an ARB. The front still has the stock helical diff that adds some traction but we’ll probably put a locker in the front before our next trip to Moab. The hummer has lots of low end torque from the 6.2 diesel and it’ll climb almost anything, so it’s great for Moab. It’s big and wide and doesn’t flex much, so it’s not the best rig for most of the Sierra trails.

We couldn’t resist the temptation to crawl this VW after all the good stuff had been removed for a sand rail. After several approaches to squash a good path, we made it up. Getting up took about 10-15 minutes but getting down off of bent sheet metal took far longer.

Ed’s 1996 Eddie Bauer Bronco was once his daily driver. The engine was upgraded to a Ford Racing 460 Windsor. Traction duties are handled by ARB Air Lockers front & rear, 4.11 Sierra Gear Ring & Pinions and 33×12.5 BFGoodrich KO tires. This mighty rig has been outfitted with tons of aftermarket widgets, including on-board GPS navigation, a Warn M15000 winch, a massive front bumper by Winch Ready and many other extras. You just might see Ed out on the Rubicon Trail……the photo below was taken somewhere near Observation Point on the Tahoe side.

Sam’s 4Runner has come a long way from it’s start as a daily driver. The IFS front suspension was surgically removed and initially replaced with a straight axle Dana 44 and 5″ leaf springs. Rear suspension duties are handled by a pair or 53″ Chevy leaf springs. Both front & rear axles were later upgraded to Ford 9″ in RuffStuff housings. Both front and rear axles are both equipped with ARB Air Lockers, providing 100% traction on-demand to the 37″ Goodyear MTR tires. 2.5″ King shocks and a Currie Anti-Rock swaybar control the ride. Behind the Toyota V6 engine is a factory automatic transmission coupled with a bunch of transfer cases, resulting in a low-range crawl ratio of about 233:1. An internal rollcage for the 3rd Gen Tacoma by 4xInnovations was modified to fit the 4-door configuration and provide safety for the driver and passengers.

For inquiries about our products and services, please fill out the form below. We look forward to serving you!